One of my more exciting jobs every week is to come up with something to say on the church sign. You’d be amazed at the people who come in off the street just to say they like the message.

I’ll be totally honest and admit that I come up with a lot of ideas from Google. Just look up “church signs” and you’ll get a wide range. There are hilarious bloopers… 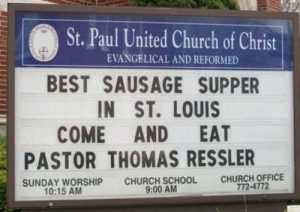 We’ve had our own of these. As many of you know, I outsource the changing of the sign to the CEO volunteers, who once advertised a church service on “Monday Thursday” instead of “Maundy Thursday.”

There are also the guilt trips: 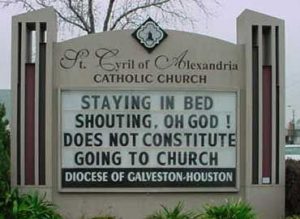 And the just plain cheesy: 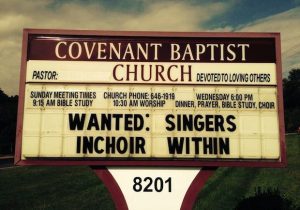 The Gospel of John is called the Signs Gospel.

Where the other three Gospels use the word Dunamis, or miracle, to describe Jesus’s works, John uses the word Semeion or sign. Why? Because the purpose of John’s Gospel is to convince people to believe in Jesus Christ. He tells us he wrote it “that you might believe.” So the miracles are not important in and of themselves, but only insofar as they get you to change direction; they are signs pointing you to faith in Christ. Gail R O’Day writes that a miracle says “Look what Jesus can do.” When a miraculous act is fully understood as a sign, however, what one would proclaim about Jesus is “Look at who Jesus is.” She says, “It is not the miracle per se, but the glimpse of the presence of God at work with and in human experience that can lead to faith.”

In this way, he’s like you and me. We have within us both faith and doubt. We place limits on Jesus’s ability to heal us and others: if I only pray at such and such a time. If I get elders to lay hands on me. If he gets anointed with oil. I’m not saying that these things are not powerful, or that physical presence is not helpful for us in receiving prayer. Indeed, the Bible tells us that God wants us to lay hands on one another and to anoint with oil. Yet we can’t limit Christ to working in only those situations. Sometimes physical presence is not possible. But that doesn’t mean God isn’t at work. Spiritual presence is as important as physical presence. Even if you are far from someone you care about, praying for them, thinking of them, writing them a letter can be a healing act. Don’t limit Christ to situations of physical presence.

Normally, we think of these as words of rebuke. John Calvin criticizes the attitude Jesus describes here: “Let the miracles come first and then we will give ear to their teaching. As if the truth of Christ should be so vile to us unless it has another support.” But can’t we think of Christ’s words simply as descriptive? An academic discourse on who Christ is wouldn’t have much impact for us unless we can see who he is for ourselves. We need signs to point us in the right direction.

Yet Calvin says, “We can see how much He values even a weak faith.” God has mercy on us and gives us the signs we need.

Have you ever experienced a sign from God, when God strengthened your weak faith by pointing you in the right direction? In July 2014, I was unclear which direction I should go. I knew that I was called to move on from my ministry at that time, but God wasn’t opening up any full time calls in parish ministry. My spiritual director encouraged me not to limit the idea of ministry to work in the church. I began to consider going back to school because I had a longing to use my mind and to learn. Dan really encouraged me to look at law school because he believed I would have an aptitude for that work. In July I was in talks with Starr Church when my acceptance to Wayne came in along with a full scholarship. I was really excited and wanted to go, but Dan wasn’t so sure. It would be a great leap of faith for our family. We went out to dinner and talked about it, and it was hard, but if we weren’t united in this decision I wouldn’t do it. So I decided to turn down the scholarship.

The next day Dan got to work where he received a call on his cell phone. It was the dean of the law school, who had not spoken to me at all, but called Dan instead for some reason. He wanted to encourage Dan to tell me to take the scholarship. Dan explained that it would be difficult because I was pregnant and my final exams would be at the exact same time that the baby was due. The dean shrugged it off and said they could reschedule my exams if they had to. Dan thanked him and decided to go out to lunch with his interns. While at lunch, they were all talking about their law school loans, and Dan casually mentioned that I had received a full scholarship to law school. They couldn’t believe that I would turn down the scholarship and said to Dan, what’s wrong with you? At that point, a woman walked up to the table. She was the assistant dean of the law school, and she was having lunch in the same restaurant. She recognized Dan and said, “Hi Dan, I just saw you in here and thought I would say hi. I just really want you to encourage your wife to take the scholarship.” Dan got back to his office and called me. He said, “Mar, this is kind of weird, but I think God wants you to go to law school.”

God doesn’t always choose to act in every situation, but when God needs us to change direction. God gives us signs to point us to a new course, a new faith, a new action. God uses miracles, not as parlor tricks to say, hey, look what I can do, but to draw us deeper into relationship with Him. Calvin writes, “Our heavenly father often does not comply with our prayers in every detail but goes to work in an unexpected way to help us, so that we may learn not to dictate to Him in anything.” The royal official had it in his head that Jesus had to come and lay hands on his son. But Jesus wanted to strengthen his faith, to teach him to depend on God even when God’s presence wasn’t readily apparent. Gail O’Day explains that while the royal official asked for healing, “He ended up receiving much more than he could have hoped for and, indeed, much more than he knew he needed: the gift of his son’s life and the gift of faith in Jesus.”

What God wants is our faith. Although the royal official’s son lived that day, he would go on to die another day, as we all must and as we all do. The point is not evading death. The point is deepening faith in Christ. That’s why the more mature our faith is, the more we understand that we can’t dictate to God, to perform miracles like some kind of magician. The mature faith learns to trust even when we can’t see him at work. After all, he might be working in ways we cannot see. A song by MercyMe describes this kind of mature faith, in a song called “Even if”:

Sometimes what God needs to do to deepen our faith is to not act. Sometimes we need to learn to trust in a God we cannot see. Because God is interested in more than our temporary situation. God wants to strengthen us to face every obstacle, even unto eternal life.

And I guess this paints a cruel picture of God if it weren’t for one thing: that God suffers alongside us. That royal official loved his son, but God loved him even more. God entered into his suffering in the deepest way possible. God experienced the suffering, and even the death, of His own Son. And in Jesus, God felt the pain of God’s own absence: Jesus crying out, My God, my God, why have you forsaken me?

But even in that moment, Jesus demonstrated faith even if God does not act. Even when God was absent, Jesus chose faith. Jesus chose trust. And in so doing, He made from your weak belief and mine a saving faith.

Sometimes God grants us signs. Sometimes God points us in a new direction. But sometimes He doesn’t. Sometimes He asks us to believe when we cannot see. In those moments, God has not abandoned us, as we may think. Rather, he is beside us all the more strongly. We might say, God, I need this from you, I need that from you, and when God doesn’t act in the way we want, we think God is not there. But when we look back, we will see all the signs God was placing in our path to point us in the right direction, which is always towards greater love, greater faith, greater hope. If you are in a time of pain, in a time of suffering, in a time when you want Jesus to come and heal you and he just won’t do what you want, I offer you this: God knows what it is to suffer, and you do not suffer alone. God is calling you to a deeper faith, to trust where you cannot see. Follow the signs. They all point to the outstretched arms of Christ.

In the name of the Father, and the Son, and the Holy Spirit, Amen.